Cassandra used to say to her friends: “Medusa is one of the most beautiful felines in the world.”

Medusa, an angora cat with one green and one blue eye. Her long and fluffy tail sometimes became like a question mark when her owner took her for a walk to the park at sunrise as if she were a dog. When the other dogs watched her and approached her they took precautions. But Medusa immediately hissed and scratched their noses, and they ran away from her as if they saw the devil.

People loved her elegance and charisma. Other pedestrians stopped to caress her and ask Cassandra how she trained Medusa to walk on a harness and leash. “She does it by instinct,” she said with pride.

Cassandra was unmarried and a retired teacher. She lived in her apartment alone with Medusa and had a very special relationship: they spent all their time together except when Cassandra went to the mall or to buy groceries or visit her friends where she used to work. Naturally, they went together to the beauty parlor for a trim once a month.

One day ,Cassandra met Hector at the park. His attention was drawn by Medusa’s elegant walk and Cassandra’s long black hair. He approached them flattering Medusa’s beauty. Since that day Hector waited for Cassandra with her gorgeous feline.

After a few weeks of seeing each other at the park, Hector invited Cassandra to go out to a café; she accepted gladly.

After a few pleasant meetings and conversations, Cassandra invited Hector to her apartment. When they arrived Cassandra was very surprised that Medusa didn’t come to greet her with her usual musical meow. She called to her for a few minutes and she emerged and approached Hector. First, she smelled Hector as if were her first time smelling him. The curious behavior of the cat made him nervous. He tried to caress her and she scratched him painfully. Cassandra offered to wash the wound to avoid an infection.

That evening, Hector said goodbye to Cassandra and left a little bit confused by Medusa’s strange behavior. Cassandra assured him that Medusa will get accustomed to his presence and he agreed.

That night Medusa refused for the first time to sleep with her master. Medusa slept in the living room’s sofa alone. Cassandra went to her bedroom without understanding the behavior of her adorable feline.

The days passed. Hector and Cassandra continued their meetings at the same café at least twice a week. After one of their dates she proposed to go back to her apartment and see if Medusa’s jealousy had subsided.

This time Medusa greeted her owner and as soon as Cassandra sat in the armchair, she jumped into her lap and started to purr flirtatiously. When the chat was very lively, Hector went to the restroom. Medusa took advantage of the moment and peed on his blazer, without Cassandra noticing. When he returned, Hector felt more at ease with Medusa’s calm behavior.

A short time later, Hector said it was time for him to leave. But when he went for his blazer, Hector noticed it was wet and was greeted by the unpleasant odor of cat pee. It was completely wet.

Once more, Cassandra was embarrassed and apologetic with Hector. She explained to him that Medusa had never done this before. She thought that Medusa might be sick and promised she would take her to the vet the next day. Moreover, Cassandra offered to take his blazer to the dry cleaner.

Hector said goodbye very affectionately, although he was worried about Medusa’s boldness.

When Hetor was gone, Cassandra confronted Medusa angrily and looked into her blue-green eyes: “ Medusa, why do you keep complicating me my life with Hector? Devil cat!”

Without Cassandra realizing, Medusa’s eyes changed from their normal color to red, full of evil and malevolence. Medusa, without purring or meowing, went to Cassandra’s bed, letting her know that it was time to go to sleep on the pillows made of goose feathers.

The next day, Cassandra took her cat at the vet. The results showed no illness or infection

Cassandra thought that perhaps in the morning the three of them should go for a walk and then to the café. Perhaps Medusa would enjoy the walk and would be occupied pestering the dogs or hunting birds and squirrels.

Hector accepted and agreed to get together at the same park where they first met. He awaited them anxiously and impatiently. To their surprise, Medusa ignored Hector. The three walked towards the café.

Inside the café was a little caged monkey that would amuse the guests with tricks and dances. This time, however, the monkey was out of his cage. Medusa approached him, unable to contain her curiosity; when she grew close, the monkey screamed with terror, starting a horrendous fight between them. Hector tried to separate them without success. Once more, he emerged covered in scratches, this time from both animals. One of the waiters apologized for letting the monkey out and returned the monkey to his cage.

Cassandra took her cat into her arms and asked Hector if they could leave. The three walked in silence to Cassandra’s apartment. She offered Hector some tea to help calm his nerves after such a catastrophic incident. He accepted, but said he would stay for only a few minutes. Cassandra played a CD of the song “Ode to Joy.” She excused herself for a moment to the bathroom.

Hector stayed in the living room with Medusa. In front of him was a large mirror. In the reflection, he suddenly saw the cat’s ears become massive horns; the fluffy tail turned long, red and thin; and the incisors grew long. Medusa grew to the size of the entire mirror. A sulfurous odor enveloped Hector, and a sensation of hatred emanated from the diabolic sight. Hector began to sweat copiously and his breath grew labored. His heart couldn’t tolerate the malevolent sight, and he fell to the floor, as if struck by a bolt of lightening.

Cassandra heard the sound of his fall and rushed into the living room, mouth agape. With horror, she saw the lifeless body of her beloved and tried to revive him. When she was unsuccessful, she called 911.

Cassandra waited for the ambulance in the armchair. Medusa jumped into her lap and licked her hands, trying to console her. Then she glanced at the mirror decorating the wall for a glimpse of her diabolical image laughing malevolently at its success.

In the meantime, her owner sobbed for her loss and heard in the distance the sound of the ambulance.

One thought on “Medusa”

This site uses Akismet to reduce spam. Learn how your comment data is processed. 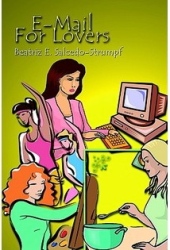 Played out against the background of today's instant communication via internet, this is a story of a woman who comes face to face with emotional and cultural questions when a chance meeting with a lover from her past reopens repressed feelings and exposes the scars of earlier wounds. Milagros, our heroine, is truly a "miracle" as her Spanish name implies, struggling to find her way in a world that is often alien and always gender-hostile. In an attempt to escape the machista environment of her native Mexico, she comes to the United States to study and eventually marries an American and settles down in Moggenbrunn, New York. There, in the gloom of endless winters and bone-chilling cold, she is slowly divested of her complacent cocoon of wife, mother and professional woman as she recounts and analyzes her roles, aspirations, and experiences to her virtual lover. In the end she discovers that betrayal can come in many unexpected levels, but hope and renewal are as constant as the sun of her beloved Tenochtitlán.

"The eight Latinas showcased in this book - a foundation president, two business CEOs, a doctor, a former college president, a teacher and author, and two school superintendents - grew up with a determination to get educated that was fostered by parents and grandparents. Ingrained in each of them is a sense of honor, the nedd to treat others with respect, and an inner strength, all qualities nurtured by family members."